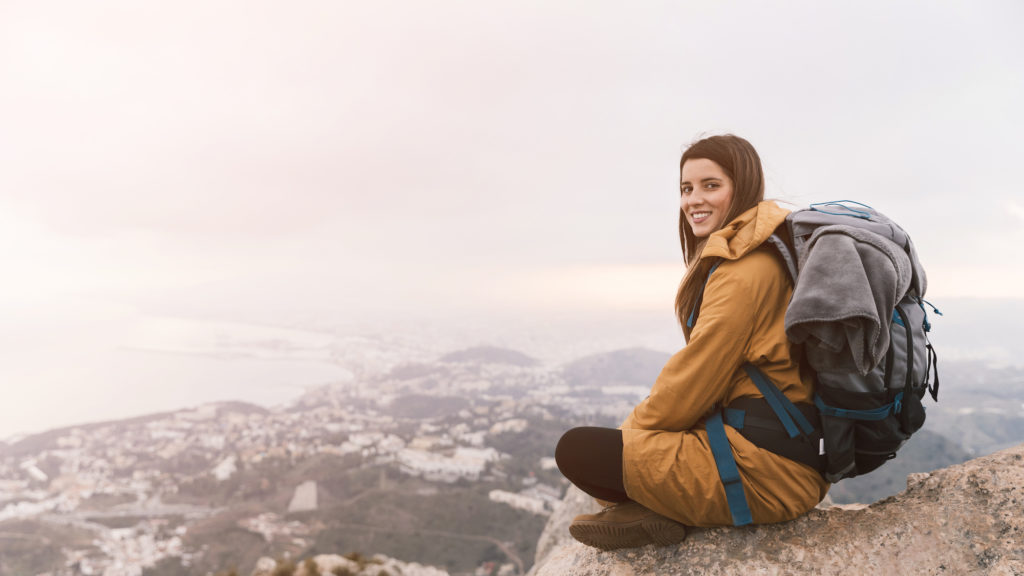 At 36, Lauren is a happy and healthy Colorado mom who likes to hike with her two kids. But 5 years ago, after the birth of her second child, she developed pelvic organ prolapse (POP). That’s when one or more of the pelvic organs (in Lauren’s case, the rectum and bladder) drop down from their normal position.

At the time, Lauren didn’t know what prolapse was. “I spent the next few years learning how to manage and change my lifestyle, and what the treatment options could be,” she says.

In this edited interview, Lauren discusses what she’s learned about POP and how she’s adjusted to her changing body.

How and when did you notice the prolapse?

Lauren: It was 5 weeks after my second child was born. I sneezed in the shower and felt something pop inside of me. Right away I thought, this cannot be good. I reached up and I felt a bulge in my vaginal wall. Instead of a mostly smooth and firm wall, I felt a lump and the wall dropping down in one place.

I immediately got out of the shower, called my midwife, and described what happened. She said it sounded like a rectocele – a kind of prolapse where the rectum drops down and bulges into the vagina.

What happened when you saw your health care team?

Lauren: When I went to see my midwife and ob-gyn, they said I had a grade-one rectocele and a grade-one cystocele, which means my bladder also had dropped down. I hadn’t even noticed the cystocele.

Lauren: I was having a lot of bladder urgency and difficulty holding urine. I also was having trouble fully eliminating stool. Sexual intimacy was painful, and I was avoiding it because you know your husband can feel the rectocele. When the rectocele was very bad, it made me afraid to pick up my kids’ toys. Some days it also made hiking uncomfortable.

Another thing: sometimes a rectocele can feel like a flesh pocket filled with pebbles – the pebbles being feces that have gotten stuck in the rectocele and can’t exit the body normally. So, a lot of women will put a finger in their vaginas to press against the bulge to push the feces back so they can eliminate completely. This was one of the worst parts of the rectocele when it first happened.

Now, this is rarely a problem for me. And back then, I thought maybe it was just a unique problem I was having. I later learned it was a common symptom of a rectocele.

What kind of treatment did you try?

Lauren: First, my doctor referred me to physical therapy with a woman’s pelvic floor specialist. I did physical therapy once a week for a few months, and I made great improvements in controlling my muscles. The therapist checked nerves and ligaments and had me contract my vagina with Kegel exercises. The goal was to get my muscles working properly so my organs had support, even if the ligaments were overstretched.

Then my physical therapist recommended I see a rehabilitative Pilates instructor. This was only after I had gotten to a point where I would benefit from exercise again (and my body wouldn’t be compensating in incorrect ways that could cause more problems for me). I’ve now been doing that for 3 years. I feel much better, but not quite 100 percent.

I also decided to try an anti-inflammatory diet for other health reasons, unrelated to the prolapse. I cut out grains, gluten, and dairy, and I reduced sugar. I was an extremely healthy eater before – lots of fruits and veggies, whole grains, organic foods – but cutting out those foods turned out to be the final step that relieved my rectocele symptoms.

How are you doing now? Are you back to hiking? Are you enjoying sex again?

Lauren: I am hiking again, even with my youngest in a back carrier. Sex varies depending on whether I’m having a good or bad pelvic floor day. And that varies with hormone fluctuations, digestion, bowel movements, how much pelvic tension I’m carrying that day, and a few other factors. On good days, sex is great.

I will say that with all the movement now, I’m always trying to predict how a physical situation will impact my pelvic floor. It becomes second nature, and I wish I would have had more of that earlier in life – working with my body and listening to its cues, instead of taking it for granted.

What advice would you give other women dealing with prolapse or planning a pregnancy?

Lauren: I read a lot of pregnancy books and asked a lot of questions, but I didn’t understand the pelvic floor and how it is affected by pregnancy. I wish I had known what my ligaments were doing and that they could stretch so much. I wish doctors would talk more about this.

If you’re pregnant or thinking about getting pregnant, learn about the pelvic floor and the risk of prolapse so you can take care of yourself if it happens. If it’s already happened, know that you’re not alone. There are thousands of women dealing with this.

This website uses cookies so that we can provide you with the best user experience possible. Cookie information is stored in your browser and performs functions such as recognising you when you return to our website and helping our team to understand which sections of the website you find most interesting and useful.

Strictly Necessary Cookie should be enabled at all times so that we can save your preferences for cookie settings.

If you disable this cookie, we will not be able to save your preferences. This means that every time you visit this website you will need to enable or disable cookies again.