The Veranda is excited to announce the addition of its newest physician, Brandon Seagle, M.D. Originally from Leesburg, GA. Dr. Seagle received his bachelor’s degree from The University of Chicago. He then went on to receive his medical doctorate from Stanford University School of Medicine and later a Master of Science in Health Services and Outcomes Research from Northwestern University. Dr. Seagle has chosen Albany to open his practice in Obstetrics and Gynecology and he joins The Veranda. 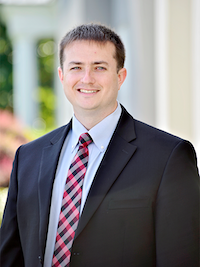 “I truly believe that Obstetrics and Gynecology is the best specialty in medicine, at least for me. I like the variety of surgery and the routine good outcomes, as well as the physiology of pregnancy. Pregnancy is a special time in a woman’s life, and I enjoy being a part of it,” says Dr. Seagle.

This will be a re-entry into Obstetrics for The Veranda as the practice made a shift 3 years back to concentrate on women’s health rather than labor and delivery in their Gynecology practice. “The Veranda is thrilled to be able to offer obstetric services to our patients again. Being with families as they add new members, is something we have enjoyed in the past and are excited about continuing into the future,” says The Veranda President John Inman, III, M.D., FACOG.

As well, Judy Yeh, M.D., Dr. Seagle’s wife, is completing her fellowship at Yale School of Medicine in Urogynecology, and will be joining The Veranda in the Summer of 2019. The two new physicians will lead up the obstetrics practice at The Veranda.