Coronavirus (COVID-19): Click here to learn how we are protecting our patients, community, physicians and staff. 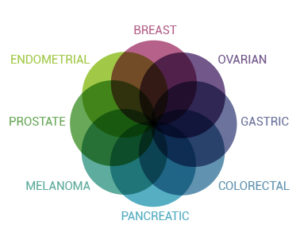 The Myriad myRisk myRisk®Hereditary Cancer test is a multi-gene panel that identifies an elevated risk for eight hereditary cancers.

Research has shown that up to 10 percent of cancers are due to factors that are passed from one generation to the next. These syndromes are known as hereditary cancers and there are genetic tests that can be used to determine an individual’s risk for developing these cancers. If you suspect that you or someone you know may be at risk for cancer –- such as a family history of cancer or membership in an at-risk ethnic population (such as people with Ashkenazi Jewish ancestry) –- you may want to talk to your healthcare professional about genetic testing.

There are many benefits to getting tested, regardless of the eventual result. If one of your family members — however distant — had cancer, there is a chance that you inherited a gene mutation that not only increases your personal risk of cancer, but also could be passed to the next generation. Those who are carriers of hereditary cancer gene mutations, could be at risk of getting cancer earlier in life than the general population. The sooner genetic testing is done, the more likely it is that the risk can be managed appropriately.