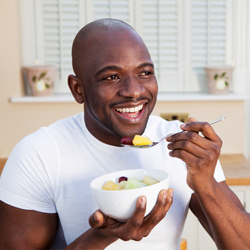 Diabetes is an endocrine disease in which the body does not properly produce or use insulin, the hormone responsible for converting food into energy. More than 23 million Americans have been diagnosed with diabetes. There are many major types of diabetes, including Type 1 diabetes, Type 2 diabetes, Gestational diabetes, and Pre-diabetes.

Type 1 diabetes affects approximately 5 to 10 percent of Americans and is the result of the body’s failure to produce insulin.

Type 2 diabetes affects the majority of Americans diagnosed and is a condition in which the body resists the use of insulin in addition to a relative insulin deficiency.

Gestational diabetes occurs in some women during pregnancy.

Pre-diabetes is a condition that occurs when one’s glucose levels are higher than normal, but below the threshold for a diabetes diagnosis.

How can I reduce my chances of developing diabetes? Although the cause of diabetes is uncertain, there is evidence that genetics and behavioral factors, such as obesity and lack of exercise, play important roles. Fifty-seven million Americans have been diagnosed with pre-diabetes and many more are unaware that they have the condition. Fortunately, although a very serious medical condition, pre-diabetes is treatable through lifestyle changes, such as improving your diet and increasing physical activity.